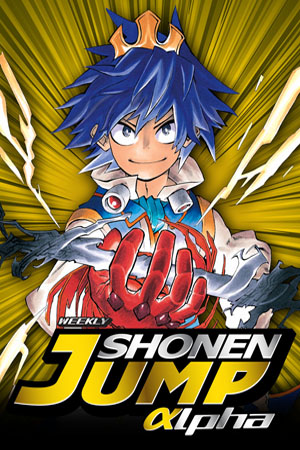 The oft-delayed Shonen Jump Alpha impressions finally makes its return this week, with the US premiere of Barrage that was announced at Fanime. Ready to start a series from the beginning? It looks pretty promising.

*This edition of SJA Impressions was delayed for you by Cosplay Jam editing and Diablo III.

Piercer – I’m going to go ahead and say it. Got a big Tengen Toppa Gurren Lagann vibe from the main character Astro. Especially with the whole “pierce” thing in the title. We get a decent enough look at his upbringing, seeing his beliefs and motivations. It’s pretty par for the course, and he is likeable. I was getting a very much “The Prince and the Pauper” vibe once we see Astro’s look-alike Prince Barrage. And then it all went away. We quickly meet the king and Lieutenant Tiamat, and we end it with a glimpse of the Orgue bonding with Astro, giving him great power. Interesting weapon choice there, being a spear. Well, chapter one is pretty intersting. Let’s hope it gets better during its first year. Let me know how you like this new series.

The Izanami Activated – I must admit. This fight so far has been pretty good. Even with the somewhat unnecessary flashback in the middle of the fight, it’s been pretty good. First chapter was pretty confusing, but I’m sure most of you were able to understand somewhere in the middle. The Izanami is one strong technique. Will this be the end of all the zombie ninjas? Well, not right away.

Cool Fight – Not much going on in this cover story volume, but let’s hope this won’t be the last we see of Ivankov. We start off with some really great Franky-Chopper antics. Who couldn’t see that he was going to use the Rumble Ball right away? Looks like Caesar wants to examine Franky’s cyborg body for Vegapunk’s tech. Unfortunately, we still don’t get a clear look at Scotch and Rock’s faces. Luffy shows off some new abilities, and I really like that Gum Gum Balloon has been changed so that he can aim it. And at the end we get Law! New pirate alliance to be formed? Granted, this was predicted back on Saobody Archipelago. But to take down one of the Four Emperors? That’s new. Guessing it’ll be either Kaidou or Big Mom.

Lord of the Capital – Gitsune is back and reunites with one of her former comrades. One of the Gokadoin is there to “greet” her, but she quickly makes him retreat, surprising even Ryuji. While she also gathers her own yokai horde, Kubinashi’s trip doesn’t far so well, with a majority of the clan he wanted to recruit killing themselves under the control of another. Looks like Rikuo will once again be heading off to face Nue again. Felt like it was just recently when they met for the first time. But now they’ll be backed by the full (remaining) force of the Keikain clan.

Balancer’s Justice – So Ayon’s summoned or formed by the fusing of those two girls’ left arms. And he seems to be giving Quilge more trouble than he thought. And just in case you forgot, we get some back story of the Quincies, and how this has been a war in the making for some time. Back in Hueco Mundo, just when you think it’s over…right? Quilge gets back up and has another transformation?

A Taste of Bubble Fruit – On verge of death, Toriko finally achieves his goal: the Bubble Fruit! But Master Chin can’t stay long, as he rushes back to the temple to face Chiyo, who is now aligned with the Gourmet Corp. And that is actually one of the most brutal death’s I’ve seen in a modern shonen manga. But it was handled very well with not actually showing the violence. The outcome is really all that matters. Also, ew. Ootake reappears, looking very much more differently than he was abducted. But WHY WAS KOMATSU STABBED?! D: