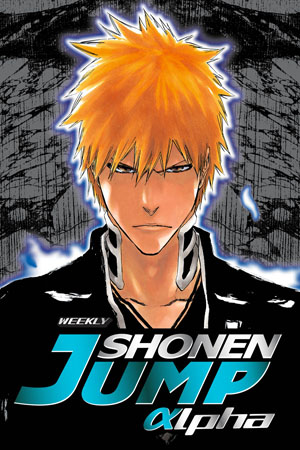 What’s up with your neckbrace, Ichigo? Also, gravity how? I know that was there in the previous chapters, but I thought it was actually attached to more, like an article of clothing.

The Final Chapter: Thousand-Year Blood War Arc – So, I’m not a big fan of putting the title of the chapter at the very end of it. Also, not really feeling the forced naming of the arc when we’re just one chapter into it. But fans are treated to a quite a few color pages and a two-page colorspread of Ichigo along with what could be the arc’s villains (don’t worry, the colors didn’t change). Seems that Hollows are disappearing, and it seems bad, though they get killed a lot anyway. We get to meet two young shinigami in Yuki and Shino (whose names probably won’t matter in a few chapters), pupils under Kuramadani (afro guy). Of course they get assigned to Karakura Town in their first assignment! At least the earlier pages were very reminiscent of the first Bleach chapters. There was comedy, peril, even a semi-rescue. They’re not out of the woods yet, and of course there’s a “mysterious figure in the shadows” cliché. Well, two of them, but I think they’re the same person.

The Path to Light – There’s not that much that happens in this chapter, but that doesn’t necessarily mean it’s bad. We get a lot of cameos, and the resolve of Naruto’s actions being a huge morale boost for the ninja army was pretty cool. It was good seeing that all the other hero characters are still moving about. Hopefully they’ll be able to do a few more important things in this arc. Of course, just in case you forgot, we are reminded a few times about Sasuke, and then…guess who’s back? Yup. My most favoritest character ever! (No…no, he is not)

Adventure on the Burning Island – Yay! More Water 7 characters! I could spend the whole post on this cover image (especially Puffing Ice), but instead, I’ll leave it with this: who’s the unfortunate guy to be standing behind Paulie when this was taken? So, in case you forgot last week, A DRAGON! The fight was pretty entertaining, but I have two gripes: 1) top right panel on page 52, Zoro is missing the sword in his mouth, and 2) Robin didn’t do a damn thing in this fight. *sigh* Unfortunately, home base gets raided while adventure team is hunting dragons. Those full-body suits look terrible, but at the moment, my mind is running through various Oda-style images on what they could look like. Of course, I’ll be surprised either way. Who could their master be? But we get a Seven Warlords mention (who could have visited the island before?) and a half-bodied samurai who might have a similar power to Buggy. But ending his sentence with fart sounds, kind of funny for now. And of course, love the running gag from Luffy at the end.

Stew Pond Competition!! – D’aww, Yun the Wall Penguin even makes his return this chapter. Zebra has made some good headway to his full-course meal. We get a reminder of everyone specialties when it comes to food finding: touch, electro-waves, sound, luck, and smell (Toriko’s, but he doesn’t mention his; I’m just reminding you). Lots of fun antics, especially with Zebra and Yun. Some really great character designs on the fish, especially the ugly ones! And of course, Komatsu’s luck is the strongest when it comes to finding food. A shame though, I thought we would get at least one more chapter for this competition. Well, nothing wrong with a quick resolution. On to making that fortune roll!

Rumor and Article – INTERNET RUMORS! This is like a super-nerdy TMZ, and also plays on my assumptions of the worst offenders of chan boards. Everyone from our plucky duo, to Miho, to everyone at Jump HQ–they all do their best effort at damage control. But leave it to one super-otaku to ruin everything. This is definitely a reflection on what has gone on in real life of a few Japanese voice actresses. Some people really need to get over this celebrity “purity” they seem to perceive. The tabloid at the very end was a genius touch, though. Well, hopefully this won’t put the dream to a screeching halt. I was hoping they would move on to something different and let the first dream to be achieved. Though, in some cases, what happens after isn’t always the best (*see Eyeshield 21; which I love).

The Voice of the Sword – Taisei’s abilities with the scythe are pretty badass. I never would’ve expected them to fly freely like that. It reminds me of that yo-yo character from the Yu Yu Hakusho Dark Tournament Saga. Akifusa can’t reach him, and it seems that he still doesn’t understand that they are enemies. Rikuo seems to be very aloof for a while. But things change once he finally gets serious. I was worried that the whole speaking to his sword would be a little too much like Bleach, but thankfully it isn’t. And of course, the sword-breaking scythe is broken by the sword that will never break with unwavering hope. Looks like no more walking dead now…not the show or comic. That’s still going on. Okay, just be glad that they’re gone so I can stop making this dumb pun.