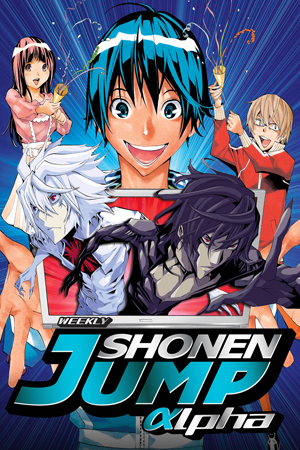 This week’s edition features a congratulatory spread from Bakuman, featuring the main characters, Miho, and the title characters from Reversi. Pretty cool that Shonen Jump Alpha is getting some distinguishing cover pages. Also, if you guys think these impressions are long, I agree. Let’s see if I can’t truncate these in the coming weeks. Or I could just save myself some pain and drop one or two. Nah. But don’t forget Alpha subscribers, there’s part one of Tite Kubo’s interview at the very end of this issue.

Practic and Recharge – Oh wow, a color page AND a double-page colorspread? Great week for Bakuman. No wonder it’s placed at the front of the issue. For the colorspread, it was pretty awesome seeing the authors and most of their respective works. Though, I don’t know what that strange character behind Hiramaru is. Miho practicing lines from Reversi was kind of touching, but it was made even more so after she recited them to Saiko later in the chapter. I’m sure there will be some plot that revolves around Hattori making sure our duo doesn’t tell that many people about their anime until it’s officially announced. They’re so close! Miho telling her manager that she won’t accept new work was a pretty silly situation. But being kept out of the loop, I can understand why the manager things she’s strange. But that otaku creeper, that guy’s a dick. LET’S START ALL THE INTERNET DRAMA! That’s what that look appears like to me.

Madam Fish – It’s a cold opening, but we haven’t had that in a while. And it’s nice to see some animal discovery again. Here’s what we get with the exposition, which looks like a quest chain in an MMORPG: get ingredients for Fortune Roll, give to sushi chef Monchy, Monchy tells which direction to eat Fortune Roll, Toriko travels that way to Chowlin Temple aka “Vanishing Temple” in the Lost Woods to obtain the ingredient in the list that the President gave him. Got all that? Not being interested in any of the fish so far, Toriko and Komatsu get news about capturing the Madam Fish in the now frozen-over Stew Pond. The catch is, the President summoned all Four Kings to catch it. Even Rin tags along! That’s two chapters in a row for her! With a capture level of 83 and their clashing personalities with Zebra, it now becomes a race as to who can capture the Madam Fish first. I’m not sure if they’ll face any battle hardships, but those adventure chapters can be very enjoyable. And let’s not forget that Chef Setsunon has an apprentice now! Well, she probably had her prior to when we first met her those many chapters ago. In any case, looking forward to seeing interactions with Nono in the future.

Punk Hazard – Yay, Iceburg! So reading that description right, that means the secretary was eight years old when she was hired. And Tyrannosaurus got kind of fat in two years, but he still looks cute in a suit. But back to the fiery water. There are some real gag gems this chapter, along with that sense of excited discovery I keep getting each time the crew goes to a new island. But a transponder snail distress call breaks up that excitement. Next destination: the island of Punk Hazard, an incredibly hot island surrounded by fire, but the man over the snail call said he was cold? If you don’t know about Wano Island, that’s okay. It’s an obscure reference from Thriller Bark and Oda’s one shot called Monster. Once again, Usopp gets to go on the Mini Merry to the new island, joined by Luffy, Robin, and Zoro (remember, last time was at Thriller Bark with Nami and Chopper). Smoker’s new look is pretty much the same as the old look. Add a long coat with fur-trim, slicked back hair, and some sunglasses…bam! Smoker cosplayers can now dress as time-skip Smoker. We get an obligatory shot of the Straw-hats partially undressing due to the heat (fellas…and ladies…). So we find out three interesting things about Punk Hazard once they land: 1) it looks like an abandoned (and melted) government facility, 2) Nami notices that the far end of the island should be frozen over due to the clouds, and 3) DRAGON! Can’t wait for next week! For some interesting theories, check out this week’s One Piece Podcast episode.

Nine Names – So instead of exploding and nuking a huge radius of land, somehow the Biju Bombs blast up into the air to explode, minimizing the damage? With all of them connected through the Nine-tails’, uh, tails, it’s interesting to see even deeper into the Biju Psyche Plane. They’re all acting reasonably friendly considering the Nine-tails rampaged a lot in the past (sure, there was that whole being controlled by Madara bit).  Of course, after that whole ordeal I had last week trying to figure out who was attacking, NOW we get the names of all the tailed beasts, and their hosts. Looks like we’re not only getting parallels with Naruto and the Fourth, but now with the Sage of Six Paths, too. Oh, and BROFISTS FOR EVERYONE! Anyone else getting that same vibe from the Green Lantern: Blackest Night? Naruto:combined biju chakra::Sinestro:White Lantern? There’s a geeky SAT question if I’ve ever seen one. Don’t tell me you don’t see it, now. Black Lantern superhero and villain zombies? Super-powered ninja zombies featuring past favorite characters?

Goodbye to Our Xcution – That is one goofy Ginjo grin. It was nice seeing Ichigo interact with the current captains and vice-captains in Soul Society. No Yoruichi cameo, though. But hey! Promotions for Kensei! Status return for Shinji! Sorry folks, not much story here. Ichigo wants to bury Ginjo on earth and he keeps the deputy soul reaper badge. And Riruka leaves. I could just end it there, but then…yeah. I’ll just end it there.

The Hopes of a Thousand Years – So what happens when you bring a scythe to a sword fight? Well, you have the upper hand if your scythe breaks any sword. Taisei’s scythe still looks really cool. I thought that they all broke free from the zombie barrier, but looks like it was just Rikuo. At least the others got some spotlight, even Tsurara! And we now know what Yukari can do besides ride on Itaku’s shoulder: fear based on luck. The sword actually being complete in terms of smithing was a good touch. I do like that cliché of “a sword and its master are one,” so I am very much okay with Nenekirimaru only being fully done once Rikuo holds it. Here we go: the Kekain clan’s finest weapon plus the strength of a yokai versus the Gokadoin clan, round 2. Oh, and did anyone else have to look up “zashiki warashi” like I did? Or did you already know it. Shut up, smarty-pants.